Nobody is perfect. Making mistakes when developing mobile applications is also essential for helping individuals grow, learn, and avoid making the same mistakes twice. Both mobile app resellers and app creators must abide by this guideline. In my years of overseeing the process, I’ve seen almost every mistake there is when it comes to creating mobile apps. These developer mistakes range in severity, some of which are more serious than others. When these errors cost you money, time, or both, they can be irritating. The circumstance favors people who are just starting out in app development, whether they are resellers or business owners.

Mobile apps have gained popularity in recent years and have played a significant role in attracting new customers. Businesses must now exist in the digital age in order to survive. We’ll go over the common mistakes that programmers make when developing mobile apps in this post, so you’ll be aware of them and can avoid them while developing your app. This will ensure that it is constructed correctly. With the advent of smartphones, people’s lives have been dramatically simplified by mobile apps. The market for mobile apps has thus grown to be the most profitable of all. New apps are released every day, especially now that iOS and Android are vying for market share.

A Few Errors Faced in the Mobile Applications Development

Research oversight could have disastrous consequences for the project as a whole. Contrary to what you may have previously assumed, if you don’t do your homework, you could wind up with a digital product that very few people want to use. The key in this case is to confirm such assumptions and improve your idea in light of them throughout the early phases of product development.

Can it be Included in your Company Plan?

These are some of the most basic questions you should be asking on your way to idea validation. You must pay particular attention to your target audience’s demographics, objectives, and motives throughout the research process, as well as what they are most likely to be interested in and, most crucially, what their needs are and whether they are compatible with your mobile app idea.

A digital customer in the twenty-first century cares about a lot of different things, not one of which is a massive mobile app. Most mobile users probably avoid using apps that use a lot of data and slow down their devices because smartphones and other mobile devices still have considerably less storage capacity than desktop PCs. The size of your program should therefore be kept as small as possible. Every software requires resources. To reduce the size of your application bundle, you can decrease the quantity of each resource and remove any that are unnecessary.

You can achieve this by using drawable objects, compressing image files, relying on vector graphics, and managing library resource utilization, among many other things. You should also think about your codebase when determining the size of your project. The size of your project may rise as a result of frequently used code elements like enumerations, debug symbols, and automatically generated code. Don’t use such components excessively. Making your APK as simple as you can increases both the likelihood that users will install your program and their ability to benefit from enhanced performance.

One of the biggest errors to avoid when creating an app is not paying close attention to the UI. Your software’s user interface, or UI, is its face and establishes the first impression. There are so many apps accessible in online app stores that users find it difficult to decide which ones to keep on their mobile devices. In other words, your mobile app’s user retention strategy may depend heavily on its user interface. The mobile design process is an essential step in producing an app that users will like using.

An application that runs smoothly for the user is crucial. Making an app that functions smoothly and retains users is essential, especially in the initial phases of the app launch. For your app to provide a great first impression, it must be tested across a range of platforms and go beyond the basics. It’s crucial to be open about the testing procedures used by your app development company. It’s important to keep in mind that an app should be tested by a qualified team or a third party. You won’t be able to release a fantastic version of your software till then.

Selecting a platform is a crucial decision that needs to be made in advance. The software cannot be simultaneously released on a number of platforms to boost downloads and user interest. A significant victory cannot be ensured in any other case. Before you begin your inquiry, find out who your target audience is and what devices they use. As a result, developing the software on a platform where user attraction is challenging carries less risk. We advise starting with one of these platforms (i.e., Android and iOS app development) and then expanding it to the other to increase the likelihood that your app will be successful. 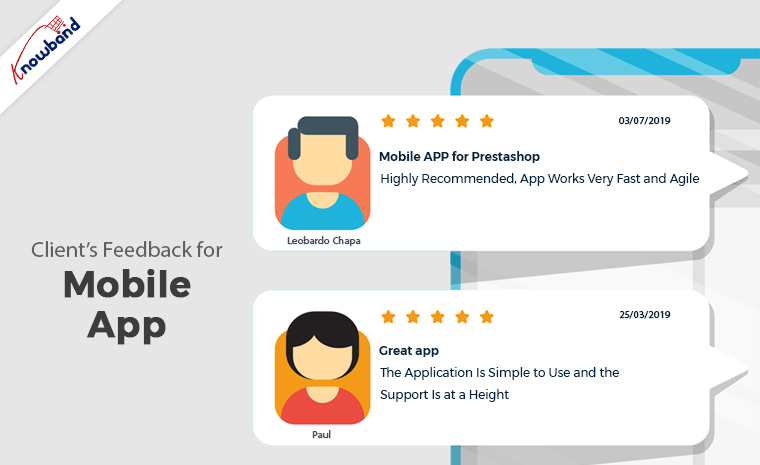 In order to produce mobile apps without problems, app developers often need to know more about the app’s target audience and the devices they use. Making engaging and highly effective mobile applications may be made easier by being well-prepared for the future and having a deep understanding of specific elements. Knowband, an eCommerce plugin development expert has recently come up with a perfect solution to build an eCommerce mobile app in a few simple clicks. To know more about the mobile app creator module functionality and installation, feel free to contact us [email protected]

Jonathan Green is the director of the content strategy. She describes her role as a combination of process architect and creative explorer.